Chakra vowel sounds connect to the universal sounds of creation. These sounds can be chanted on a single tone or sung using a simple melody for easier repetition. The vowel sounds for the chakras in order from the root chakra to the crown chakra are UH (root chakra), OO (sacral chakra), OH (solar plexus chakra), AH (heart chakra), EYE (throat chakra), AYE (third eye chakra) and EE (crown chakra). 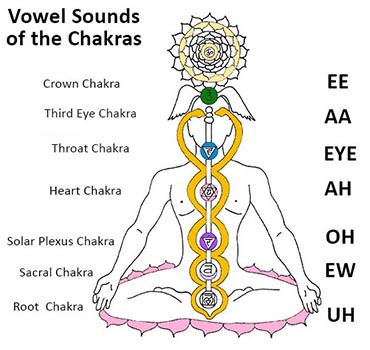 How Do Vowel Sounds Affect the Body?

The impact of vowels and consonants on the body and the mind is a fascinating science. Every sound literally vibrates the cells, bones and fluids in the body. In addition, each organ in the body is associated with one or more chakras or energy centers. As a result, chakra vowel sounds can have healing effects on physical well-being as well as mental and emotional states.

There appears to be coded formulas in mantras that use vowels to directly stimulate the chakras. This may be the fundamental power of mantras for healing. In turn, the chakras energize various systems and organs in the body. There are also mudras (hand positions) and body movements that correspond to each vowel sound.

The list below shows the connections between chakra vowels sounds, organs and anatomical structures in the human body.

For in-depth coverage of this topic, see the article Chakras and Organs of Human Anatomy.

Earth Element: I (EYE), totality of energy, concentration, will, brooding, spleen and pancreas

The root chakra vowel sound of “UH” creates a grounding energy, reflecting unmanifest potential. The root chakra is located at the base of the spine. This chakra establishes your connection to your physical body, the earth, and the environment. This is the chakra of safety and security. Learn more about the fundamental energy of this chakra in the article Root Chakra Meaning.

The name for in Sanskrit is Muladhara.  “Mula” means “root” and “adhara” means “base or support.” A balanced and strong base chakra affords the ability to stand your ground and feel safe in the world.

Working with the Root Chakra

In additional to the chakra vowel sounds, there are musical notes, instruments, mantras and bija seed syllables associated with the root chakra.

Other Sounds for the Root Chakra

Mantras for the root chakra can also be based on the bija seed syllable (LAM) or on associated Hindu deities such as Indra, Brahma and Ganesha. Find out more about Chakras and Deities.

The root or base chakra provides the foundation upon which the other chakras rest. This chakra is associated with establishing connection and survival: physical body, the earth, the environment, instincts, food, shelter, safety, comfort and belonging.

The root chakra can also be seen as connected with your personal and ancestral history. These are the roots that can either bind you to the earth in a negative sense or give you a strong base and presence in the world.

Chakra of Sexuality and Relationships

This chakra is associated with reproduction and the creation of new life. This is the realm of exchanges with others not only in sexuality but also connected to work and finances. When purified, this is the chakra of inner peace. More info available in the article Sacral Chakra Meaning.

Each chakra is connected specific physical organs. In addition to the reproductive organs, the lower back, large intestines, hips, kidneys and bladder are also connected to the sacral chakra. Learn more about Chakras and Organs.

Besides the positive effects of using the chakra vowel sounds, there are also healing stones and essential oils for each chakra. Stones that are useful for the sacral chakra include pearls, citrine, carnelian and moonstone. More at Chakra Stones and Meanings. Helpful essential oils include patchouli, jasmine and ylang ylang. This topic is covered for all of the chakras in Chakras and Essential Oils.

Deities Associated with the Sacral Chakra

Two of the deities associated with the sacral chakra are the goddess Parvati and the god Vishnu (an incarnation of Krishna). Parvati is the Hindu goddess of fertility, love and devotion as well as divine strength and power. She is the gentle and nurturing aspect of the goddess energy and the consort of Shiva. Learn more about Chakras and Deities.

The solar plexus chakra vowel sound of “OH” is gathering energy and the power of the emotions. This chakra governs the action of transformation. In the physical realm, this is digestion and adrenal function.

The solar plexus is sometimes viewed as the “third brain” due to the “gut feelings” that can help us make decisions and avoid danger. Additional info can be found in Solar Plexus Chakra Meaning.

The Solar Plexus and Sun Symbolism

The solar plexus is symbolized as a ten-petaled lotus that resembles a sun. The fire of the sun is similar to the physical energy needed to digest and transform food. Each petal corresponds to a specific Sanskrit letter and the overcoming of a negative tendency.

The influence of the moon on the solar plexus chakra is also recognized. The Hindu symbol of the chakras includes a crescent stroke and a dot to represent the moon. Learn more at Chakra Symbols.

The Solar Plexus and Wealth

The solar plexus is also closely related to wealth and abundance. Using the chakra vowel sounds will help to master your emotions. This can give you a huge leap forward in the business world!

The Hindu goddess Lakshmi is associated with the solar plexus. She is the goddess of fortune, wealth and abundance. Lakshmi is usually depicted sitting on a lotus flower with a bowl of gold coins just in front of her. Read stories of the Hindu tradition in Chakras and Deities.

The energy of this chakra integrates opposite forces to bring two parts together. The vowel sound AH assists with the health and strength of the lungs and energizes the mind. Additional information about the Heart chakra can be found in Heart Chakra Meaning.

Heart Vowel Sounds and the Meaning of “AHA”

The sound “AHA” is an extension of the chakra vowel sound AH. This exclamation is often used in English when a sudden solution or insight is gained (aha!). “AHA” is also stimulating for the hormonal system. The Sanskrit translation means something very similar: “indeed, it is true, certainly, surely, it is granted.”

The Heart Chakra and Laughter

When this sound is extended even further (a ha ha ha ha ha ha), the effect is similar to laughter therapy, which has been proven to relieve stress and depression. Indeed, laughing with friends is a powerful group bonding experience. We are thirty times more likely to laugh in a group context than when alone.

The Sanskrit word “namaha” combines the “aha” sound with two controlling consonants (n and m) and means “it is not about me; I submit to a higher power of control in my life.” This word is utilized in many Eastern chants. Listen to chants and Sacred Mantras.

Deities and Mantras for the Heart Chakra

In the Hindu tradition, the heart chakra is related to the deity known as Hanuman. Hanuman is a money-faced god reminiscent of Western superheroes that combine human and animal characteristics: Spiderman, Batman, Catwoman and so forth. Hanuman has amazing powers. One of his foremost personal characteristics is loyalty. More about Chakras and Deities.

Idioms Related to the Throat

The throat is the place of greatest vulnerability and greatest strength. This is revealed in many common expressions and idioms:

To attack someone else with lethal intent is to “go for the throat.”

To be deeply moved by unexpressed grief or sadness is to have “a lump in your throat.”

To be self-destructive is to “cut your own throat.”

To be forced to do something unwillingly is to have something “shoved down your throat.”

To put forth great effort is to “grab something by the throat.”

The Throat Chakra and the Thyroid

To maintain the thyroid in balance, we have to have a balanced ability to speak up for ourselves without causing harm to others. In addition to using the chakra vowel sounds, setting appropriate boundaries with others is another way to do this. Explore more connections between body symbolism, chakras health and spirituality in the article Spiritual Meaning of the Body.

Setting boundaries is particularly challenging for women, who tend to take the role of assisting others no matter what the cost to themselves. I spent approximately a year healing my throat chakra and thyroid with chanting, essential oils, journaling and other life changes. I tell this story below in the video “My Healing Journey: Mantras, Money and the Thyroid.” Find this video in the Throat Chakra Meaning article.

The third eye chakra vowel sound of “AYE” is related to intuition and spiritual vision. The third eye, usually associated with clairvoyant abilities, can be developed with yoga, meditation and the practice of chanting. The vibrations of chanting and singing are felt in the skull and can be consciously directed to the third eye.

The Third Eye and the Pineal Gland

The connection between the pineal gland and altered states of consciousness has been well-established in the traditions of yoga and meditation, but little scientific investigation has focused on this tiny gland. Long revered by mystics, the pineal gland has often been considered a useless, vestigial organ by medical doctors. Learn more in Third Eye Chakra Meaning.

Sensory Organs and the Third Eye

The crown chakra vowel sound of “EE” stimulates the nervous system and serves as the seat of enlightenment. According to Eastern traditions, the crown chakra is related to higher consciousness (samadhi) and the transforming powers of the divine. There is also a connection to the pineal and pituitary glands (similar to the third eye) and to the hypothalamus.

The crown chakra is represented by twenty layers of fifty petals each. This chakra is sometimes thought to be a combination of a cluster of chakras on the skull, such as the back of the head where monks may gather their hair or shave a bare spot. The crown can be viewed as the father, or spirit energy, drawing the mother, or earth energy, upward from the lower chakras. Learn more in Chakra Symbols.

Hindu Deities and the Crown Chakra

One of the presiding deities for the crown chakra is Shiva— often depicted in a dancing form known as Nataraja—Lord of the Dance. Shiva is one of the principal deities of Hinduism, part of the trinity composed of Brahma, Vishnu and Shiva. Listen to Nataraja Mantras.

Kathleen Karlsen is a musician, artist, writer and speaker. She is the author of two books (Flower Symbols and Vocal Medicine) and over 200 articles. Kathleen, her husband Andrew and their five children live in Bozeman, Montana. More about Kathleen Karlsen.