Discover the mythology of the sun and moon below, including fascinating stories from many cultures and traditions. Learn about sun and moon art symbolism, sun and moon deities, the Hindu sun god, the Egyptian sun god and Christian sun symbolism. Also included is the science and symbolism of comets. 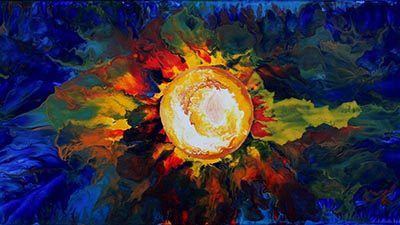 Central Focus by Kathleen Karlsen
See All Products in our Shop

The use of the sun in paintings, illustrations and emblems can be seen throughout history. The sun literally powers our world. Thus, sun art brings hope, cheerfulness and optimism. The sun is one of the first things children draw spontaneously. We instinctively desire to remind ourselves of the power of the sun with art!

The sun is the source of life, giving the energy to plants and animals for survival. The sun is associated with positivity, clarity, confidence and power. The sun is generally related to masculine energy, growth and higher consciousness. Art depicting the sun carries these symbolic meanings.

Dreams of the sun are usually good omens: everything works out when the sun is shining. Bringing this energy into interior spaces through sun paintings or other decorations is an uplift psychologically and emotionally.

Many rulers have associated themselves with the sun to emphasize their own inherent power. This includes the ancient Egyptians as well as more recent hierarchs such as Louis XIV, known as the Sun King. Christian symbolism also depicts Christ as the “sun” as well as the “son” of God. 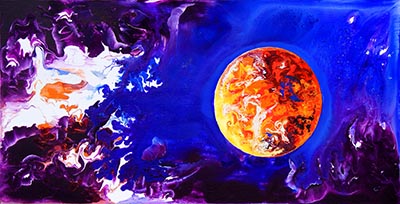 Moon art is associated with mystery and the hidden side of life. The moon is often viewed as the force that establishes a rhythm due to its changing phases. There are numerous moon deities. The moon has sometimes been viewed as masculine though more often it has feminine associations. Moon goddesses sometimes represent only one phase of the moon. Each phase can be viewed as a new cycle of life. The full moon reflects completion, maturity or pregnancy.

Many religions still use the moon to schedule significant holidays. For example, Easter is celebrated on the first full moon after spring equinox. The Chinese New Year starts following winter solstice and the second new moon. Passover in the Jewish tradition always happens on a full moon. In the Hindu tradition, the Festival of Lights called Diwali happens on the new moon when the sun enters Libra.

The moon is closely associated with human emotions and the water element. Dreams of the moon are typically related to intuition or that which is hidden. This can be a positive association such as hidden talents. The moon can also represent anything which has a strong pull, reflected in the way that the moon affect ocean tides. Ultimately, the moon represents the power of rebirth as it constantly shifts and changes. 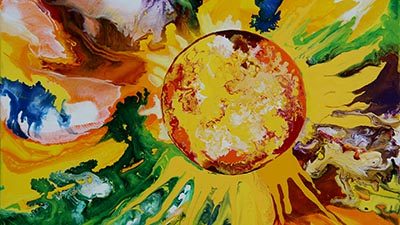 The sun has long been associated with gold; the moon is related to silver. In a story from the East, the Hindu sun god named Surya gives a gift to a devout follower. The gift is a magical gem that can produce a huge quantity of gold on a daily basis. However, this only occurs if the owner is good. If the owner behaves in an evil manner, the stone has deadly powers as well.

The transformation of base metals or sunlight into gold is an ancient quest. Empires have been built and continents explored in the search for gold. Gold is believed to reflect the sun or in fact to be solidified sunlight. The represents the self in its most exalted form: the self that shines. 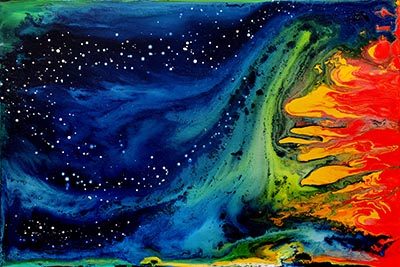 In the early Vedic period, the sun god Surya reigned supreme. In later Hindu periods, only certain sects worship Surya as a central deity. In many branches of Hinduism, Vishnu has largely taken over his roles.

In spite of this shift, many mantras are dedicated to Surya. In fact, the sun is viewed as the ultimate healer. Chants to the sun are considered to be powerful options for all conditions. There are also specific mantras for healing the eyes, believed to be benefitted by the rays of the sun. 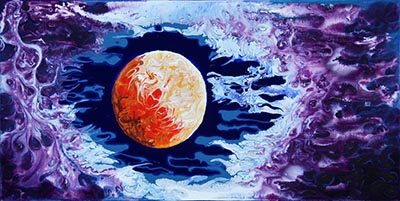 Moon Deities Around the World

Like many other deities, moon deities have changed and evolved over time in different cultures. For example, the moon goddesses in Greek and Roman culture were changed to represent the different phases of the moon. In Greek culture, their moon goddess Selene became Artemis, then had an aspect named Hectate or Persephone for the dark moon phase, the new moon became Artemis or Kore, and her full moon aspect was known as Demeter. Other moon deities include the following:

Artemis: A Greek moon goddess who also ruled over the hunt, wilderness, wild animals, and chastity. Her Roman form was known as Diana.

Chang Xi: Moon goddess in China, mother of 12 moons that correspond to the 12 months of the year.

Kabigat: Filipino Bontok goddess who cut off the head of Chal-chal’s son. The origin of headhunting came from her actions.

Mayan moon goddess: The mayan moon goddess does not have an official name, but she does have many forms. Each phase of the moon has a separate goddess, represented as a woman going through the phases of her life. She has been associated with sexuality and procreation, fertility, growth, and disease. She is heavily associated with water. 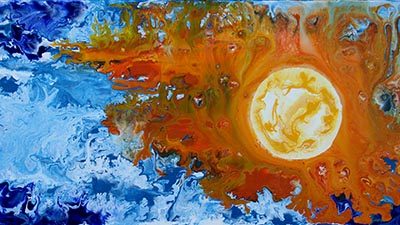 Golden Joy by Kathleen Karlsen
See All Products in our Shop

Sun Deities Around the World

The alphabetical list below is just a few of the sun deities found in cultures around the world. Solar mythologies explain the sun’s movement across the sky, often traveling in a chariot or boat.

Amaterasu: Japanese sun goddess and a central figure to the Shinto religion. The emperors in Japan claim to be descendants of Amaterasu and this is what gives them the divine right to rule.

Arinna/Arinniti: Sun goddess in Hittite mythology. The Hittites were a people located between Greece, Assyria, and the Red Sea. Arinna was called the “Queen of All Lands.”

Helios: An Olympian god believed to drag the sun behind a golden chariot in the sky during the day, returning during the night.

Hebat/Hepa: Asia Minor goddess made the national goddess by the Hittites. Renamed Arinna.

Huitzilopochti: Aztec deity of war, sun, human sacrifice, and was also the patron of the city of Tenochtitlan.

Intil/Apu Punchau: Inca sun god believed to be the ancestor of the Inca people.

Liza: Fon people of West Africa associated this goddess with the sun.

Lugh/Lug: Ancient Irish god. He was so prominent that, in Victorian times, he was considered to be a sun god.

Ra: Egyptian god seen as the sun at midday. Later he was combined with Amun to make a “solar creation god” and became known as Amun Ra. 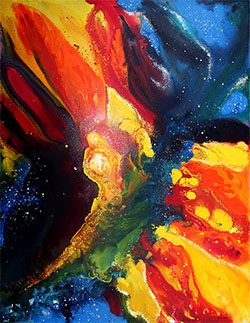 Universal Fire by Kathleen Karlsen
See All Products in Our Shop

Comets are unique cosmic bodies associated with both good and bad omens. Comets orbit the sun the way planets do, but have a longer orbit and different composition. There are currently 3,743 comets known to be orbiting our sun. Comets can be thought of as cosmic snowballs made of frozen gases, rocks and dust.

The tail of a comet is made of particles that burn off as the comet travels through space. The most famous comet is Halley’s Comet, named after astronomer Edmund Halley. Halley was the first to realize that comets have a periodic orbit. He correctly predicted the return of his namesake in 1757 after observing it in 1682.

Another well-known comet is Hale Bopp. This massive comet that made a close approach to the earth is 1997. This was the closest approach of this comet in 4,000 years. The last time the comet was near Earth was during the Bronze age in 2000 BC.

While Halley’s comet is 3.4 miles in radius, the Hale-Bopp comet is 18.6 miles in radius. It’s so bright that it was visible from earth as early as 1995 when it was still outside of Jupiter’s orbit. Another famous comet is Shoemaker Levy-9. This comet broke into 21 different pieces after experiencing the stress of Jupiter’s gravity in 1992. Then the comet slammed into the planet two years later in 1994.

According to New Scientist magazine, “The impact of one fragment – around 3 km across – is said to have yielded an explosion and fireball equivalent to 6 million megatons of TNT. The plume reached 22,000 km (13,700 miles)….”

Comets can have both good and bad symbolic meanings. In either case, they are known in Hinduism for being a disruption in the order of the world. A comet is mysterious, hard to predict event. On the other hand, they are also a point of light in the darkness of space.

In Hindu mythology, comets are associated with Rahu and Ketu, two powerful demons. In one story, Rahu and Ketu were trying to drink one of the elixirs of the gods through deceptive means. They were noticed by the sun and moon gods. Vishnu, one of the Hindu trinity, rushed in and lopped off their heads.

The heads of these demons, having already experienced the elixir, became immortal. Their bodies became serpents. The shining heads and the serpent tails are seen in the heavens as comets. The comets are believed to swallow the moon and sun temporarily, causing what we know as lunar and solar eclipses. In other traditions comets are connected to new beginnings and to the elephant-headed god Ganesha. Learn more about Ganesha Meaning.

The appearance of a comet is perceived as a bad omen more often than a good one. A comet may portend a significant death, natural disasters, political or civil unrest and so forth. Some people may avoid scheduling important events during the appearance of a comet. This may include weddings, real estate transactions or major construction projects. 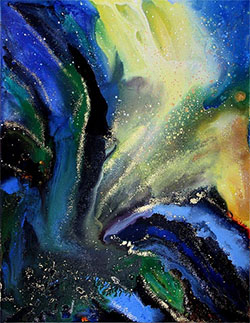 Universal Light by Kathleen Karlsen
See All Products in Our Shop

Comets and meteors also have important ties in Christianity. For example, when St. Lawrence was martyred in 258AD during the reign of Emperor Valerian, the Perseid meteor shower was at its peak. The shooting stars became symbolically connected with the saint’s tear. Others have argued that the star the Magi followed to Bethlehem to see the baby Jesus was actually a comet.

Meet the Author and Artist

Kathleen Karlsen is a musician, artist, writer and speaker. She is the author of two books (Flower Symbols and Vocal Medicine) and over 200 articles. Kathleen, her husband Andrew and their five children live in Bozeman, Montana. More about Kathleen Karlsen.

Vocal Medicine reveals Kathleen Karlsen’s personal journey and years of research into mantras, chanting and kirtan. Learn more about using mantras and singing to invigorate your life! Explore the chakras and the impact of sound in every area of your life.

Flower Symbols by Kathleen Karlsen features fascinating information about the folklore of the world’s most beloved flowers. Flowers accompany us in nearly every major event in life. This book is a perfect gift for every flower lover in your life!

Find links to all articles on our SITE MAP.
View all SYMBOLISM articles.
Find links to ALL VIDEOS. Listen to SACRED MANTRAS.